What ties people of all races, colours, creeds and sexual orientation?

I think Jew hatred has now reached a worldwide case of hate-based insanity. Here is the definition of insanity: madness, and craziness characterized by certain abnormal mental or behavioral patterns. And we can add mass hysteria, culturally acquired psychosis, and the internalization of a Jew hating cultural meme. It could even be a dissociative disorder; a mental disorder that involves experiencing a disconnection and lack of continuity between thoughts, memories, surroundings, actions and identity. People with dissociative disorders escape reality in ways that are involuntary and unhealthy and cause problems with functioning in everyday life. Or perhaps it is collective obsessional behavior or  a “phenomenon of collective suggestion” or “moral panic.” This is a sociological concept that refers to the phenomenon of masses of people becoming distressed about a perceived — usually unreal or exaggerated — threat portrayed in catastrophizing terms by the media.

Social media has allowed this “mental illness” to spread everywhere; right into your living room and bed room. No corner left untouched.

After two hours of speeches and prayers at the vigil for the Muslim family that was killed, Imam Munir El-Kassem of London’s Islamic Centre of Southwest Ontario was invited to the stage to give closing remarks, in front of PM Justin Trudeau, Jagmeet Singh and other elected officials and went on to attack the JEWS.

“There’s a reason why they say the world is a small village. Every country has a foreign policy. I just want to say, whatever is happening in Jerusalem and Gaza is related to whatever happened in London, Ontario. Period.”

The crowd could be heard cheering  following El-Kassem’s remarks. No stone left unturned when it comes to the Jews.

Does that mean if Israel did not exist – this Muslim family would be alive?

This has to be a case of hate-based insanity. Right? Because if it is not insanity then it is brazen, pure, unedited, unadulterated hate for Jews for the crime of being Jewish.

Jew hatred has been with us for as long as the Jews have been a people – about 3500 years. Today, it’s different. Because today we have social media and the hate is at your fingertips 24/7.

One would have thought that after the Holocaust Jew hatred would go away – or at least move underground. But, no. It is everywhere. There is no shame in Jew hatred-no calls of racist. No doxing or canceling. No naming and shaming. It must be mental.

Take a look at this short list. I would have made it longer  but in this day and age of short attention span…

Amazon is selling controversial anti-Israel merchandise, even though it violates corporate policy banning certain “offensive and controversial” materials.  There are products promoting the “Free Palestine” movement, including a phone case with the hashtag “Gaza Under Attack,” a hoodie with a Google look-alike asking if the person searching “Israel” meant “Palestine” and a T-shirt with the Palestinian political cartoon character “Handala.”

Handala has become a widespread symbol of the Boycott, Divestment, Sanctions (BDS) movement — a movement aimed at destroying the state of Israel.

Amazon also has carried items accusing Israel of being occupiers.

Merchandise with the phrase “from the river to the sea, Palestine will be free,” a chant used by both pro-Palestinian demonstrators and the terrorist organization Hamas, has been available for purchase. What does that mean? That means they want Israel wiped off the map – with the Jewish people. But that’s OK.

That’s OK on Facebook, but Donald Trump-not so much!

Did you know the BBC is run by Jews?

Now on the streets of Ontario, Islamic radicals have been committing acts of violence by threatening Jews, entering into primarily Jewish neighbourhoods, vandalizing personal property, and terrorizing Jewish families. Jewish men are being clubbed in the head. Signs have been raised in our streets stating, “Death to Israel.”  Jews are told not to wear their Kippot. Others are taking down the mezuzah at the door that proclaims a Jew lives here. And the politicians? Silent.

Across Canada and the United States, anti-Semitic attacks are up by 40%.

In the United States alone, the Anti-Defamation League (ADL) has collected 222 reports of antisemitic harassment, vandalism, and violence from May 10 to May 23. These ongoing incidents include antisemitic vandalism on synagogues in American cities, the physical assault of Jews on the streets by anti-Israel gangs, and calls for the genocide of Jewish people. In a statement, B’nai Brith Canada said the number of antisemitic assaults so far in May 2021 “easily surpasses” the total for all of 2020 (which already saw a record (pdf) 2,610 cases, up 18.3 percent from 2019). This follows a concurrent surge in antisemitism in the European Union and United Kingdom.

In Tucson, Arizona, a Chabad center was vandalized with graffiti, including a swastika and the words, “Dirty k–e.” In Brooklyn, New York, an enraged assailant stormed into a Jewish-owned pizzeria, flipping over tables and throwing items at diners. In London, England, a Jewish children’s school bus had its tires slashed. In Ulm, Germany, a man tried to set a synagogue on fire. And in France, a prominent politician espoused a repugnant conspiracy theory about the 2012 shooting attack at a Toulouse Jewish school.

It’s now acceptable to have Jew hating political parties in the West: the Labour Party in Britain, and the Democrat Party in America.

Congressman Ted Deutch of Florida lashed out at fellow Democrats and said their anti-Israel rhetoric is contributing to the latest wave of anti-Semitic attacks across America.

“If your position is that there’s no place for a Jewish state, there are people in the United States who hear that the entire state of Israel is some unacceptable creation … and all this is the fault of the Jews, then the anti-Semites take to the streets in New York and [Los Angeles], and then Boca [Raton] and Bal Harbour.”

“Attacks like that against Jews have led to anti-Semitism and expulsion, and violence around the world.”

“When you make unhinged claims  (Greenblatt seems to be going with the insanity plea) and conspiratorial accusations that, for example, the Jewish state is systematically slaughtering children or intentionally committing genocide, don’t be surprised when unhinged people act on those conspiracies.”

Greenblatt  noted that the condemnation of the recent spate of anti-Semitic attacks is weak when compared to reactions to anti-Asian and other bigotry.

The NDP in Canada supports BDS whose sole purpose is to see the eradication of the state of Israel.  Can you name a political party in the West that stands against Islam? Of course not. That would be Islamophobic.

And of course attacking Jews on campus is di rigeur.

After condemning the rise in antisemitic attacks, the chancellor of Rutgers University–New Brunswick apologized for the hurt his message had caused.

“In hindsight, it is clear to us that the message failed to communicate support for our Palestinian community members. We sincerely apologize for the hurt that this message has caused.”

I should live long enough for someone to apologize for the hurt caused by Jew hating comments.

In Princeton, dozens of faculty members signed a letter condemning “Jewish supremacy” without any mention of Hamas’s genocidal program against Jews.

The City University of New York (CUNY) faculty union is voting on a resolution to endorse the Boycott, Divestment, and Sanctions (BDS) movement and accuse Israel of “crimes against humanity” and “ongoing settler colonial violence.” NY – the home of Jews. 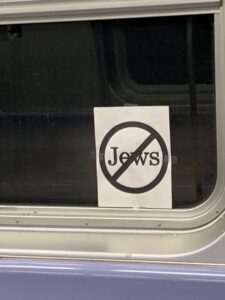 Seen on Subway in New York

The leadership of the United Teachers Los Angeles (UTLA) is expected to vote in September on a resolution to stop US aid to Israel and to endorse the Boycott, Divestment and Sanctions (BDS) movement against “apartheid in Israel.”

Jew hatred is so ubiquitous on campus that a group of 19 Republican members of Congress  sent a letter to U.S. Education Secretary Miguel Cardona highlighting rampant anti-Semitism at American colleges and universities, and urging him to apply Title VI of the Civil Rights Act of 1964 to protect Jewish students as it would towards racist actions against other minorities. Not only do Jewish students on campus face anti-Semitic attacks from students but also often from their professors – learned well from the Nazis.

Nothing says Jew hatred like desecrating the Torah in…Germany!

Palestine is our generation’s South Africa and, if we don’t step up boldly and courageously to end the imperialist project that’s called Israel, we’re doomed.

Can you imagine calling for the eradication of Rwanda?

And then you have groups like Antifa, very famous in America, who call for the annihilation of the Jewish nation and the Jewish state. They chant “From the river to the sea, ‘Palestine’ will be free.” Guess they can get their merchandise from Amazon.

It looks and sounds like mass hysteria, doesn’t it? A worldwide mental illness. It’s like an obsessive compulsive disorder.

Except it is not. Jew hatred is not a mental illness or moral panic. Jew hatred is the timeless fallback position for every race, colour, creed and sexual orientation who needs a scapegoat.

And why not? There are 7.8 billion people on the planet; billions of whom are unhappy and only 14.7 million Jews, a statistical error in a Chinese census.

“Who ya gonna call out?”

There is no cure for Jew hatred. None. Zero. Nada.

But we aren’t going anywhere. We will be the thorn in your side, the pea under the mattress, until all of you realize that you are not victims. That you have agency to be the best you can be. And you will, if you walk away from “leaders” who constantly tell you that you are victims as they make millions of dollars off you suffering.

The Jewish people are called stiff-necked. Our presence on earth speaks to that. You can be stiff-necked too. 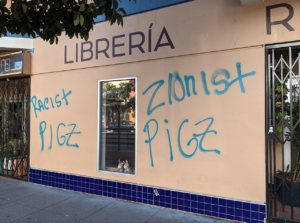