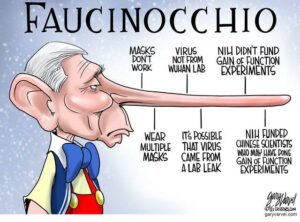 “Quiet; come to order”  called the College of Cardinals.

And the Pope spoke:

“Attacks on me, quite frankly, are attacks on science,” cried the infallible Pope Fauci. “All of the things I have spoken about, consistently, from the very beginning, have been fundamentally based on science. Sometimes those things were inconvenient truths for people.”

“Inconvenient truths”, he says, when questioned about the source of the Chinese Virus, the wearing of masks, lockdowns and vaccinations. So sure of himself is this Pope that no one is allowed to disagree, by religious fiat! Ahh another Pope Urban VIII; the Pope who silenced Galileo for the audacity to suggest that the earth was not the centre of the solar system. For those of you uneducated on Galileo versus Pope here is a brief history.

On April 12, 1633, chief inquisitor Father Vincenzo Maculani da Firenzuola, appointed by Pope Urban VIII, begins the inquisition of physicist and astronomer Galileo Galilei. Galileo was ordered to turn himself in to the Holy Office to begin trial for holding the belief that the Earth revolves around the sun, which was deemed heretical by the Catholic Church. This was the second time that Galileo was in the hot seat for refusing to accept Church orthodoxy that the Earth was the immovable center of the universe. The first time was in 1616.

On June 22, 1633, the Church handed down the following order: “We pronounce, judge, and declare, that you, the said Galileo… have rendered yourself vehemently suspected by this Holy Office of heresy, that is, of having believed and held the doctrine (which is false and contrary to the Holy and Divine Scriptures) that the sun is the center of the world, and that it does not move from east to west, and that the earth does move, and is not the center of the world.”  “We order that by a public edict the book of Dialogues of Galileo Galilei be prohibited. Galileo agreed not to teach the heresy anymore and spent the rest of his life under house arrest. It took more than 300 years for the Church to admit that Galileo was right and to clear his name of heresy.

Pope Fauci learned well from his predecessors.  He is silencing anyone who disagrees with the origin of the Chinese Virus – as named by President Donald J. Trump –  and the treatment of it. The Pope attacked the efficacy of hydroxychloroquine because President Donald J. Trump mentioned it as a treatment, and he made sure everyone knew he was the boss regarding the pandemic.

Working with his College of Cardinals: Facebook, Twitter, the main stream media and of course the Democrat Party in America, Pope Fauci silenced all.

Well we know how the Galileo attack ended – with his vindication. True, it took 300 years but I think this time, the Pope will be taken down much sooner.

To show the power of this Pope, look to Ontario, Canada, where the doctors, themselves, were silenced by their own professional organization.

You will not deviate from the gospel!

Dr. Kulvinder Gill the co-founder of the advocacy group Concerned Ontario Doctors, was issued three cautions for “inappropriate” and “unprofessional” statements she posted on Twitter that claimed neither lockdowns nor vaccines were necessary.

She had also written that “we don’t need a vaccine,” and shared a Tweet claiming that contact tracing, testing and isolation were “ineffective, naive & counter-productive against COVID-19.”

The college’s complaints committee cautioned Gill for all three posts, citing a “lack of professionalism and failure to exercise caution in her posts on social media, which is irresponsible behaviour for a member of the profession and presents a possible risk to public health.” Lockdowns in China and South Korea were evidence they reduced the spread of COVID-19, the college wrote.

The Pope promoted lockdowns. Collateral damage be damned. This is what China wanted. In emails to George Gao, the director of China’s Center for Disease Control and Prevention from March 2020, the two struck an unnervingly collegial tone despite China’s role in unleashing COVID. “Hope the US situation is getting better eventually… Lets work together to get the virus out of the earth,” emailed Gao. “We will get through this together,” responded Fauci.

Opposition to lockdowns was deemed unscientific. When scientists spoke out against lockdowns, they were ignored, considered a fringe voice, or accused of not having proper credentials. The professional opinions of Sunetra Gupta from the University of Oxford, one of the world’s pre-eminent infectious-disease epidemiologists, and Jay Bhattacharya from Stanford University, an expert on infectious diseases and vulnerable populations were attacked.

Yet, if we look to Florida and Sweden opposition to lockdowns becomes, at the very least, questionable.

As other nations implemented lockdowns, Sweden had few rules, focusing instead on social distancing. Its death toll rose much higher than the countries beside it, despite having similar population demographics. However, that death toll has stayed lower than many other European countries that were overwhelmed by the virus.

Governor DeSantis said after one year of Covid:

But let’s get back to Pope Fauci who promoted the belief that the virus came about naturally. From a bat to a man. 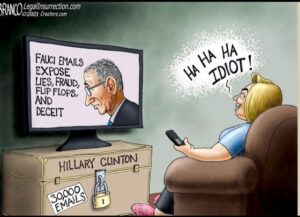 Scientists told Fauci that COVID-19 might be engineered but he ignored them.

Kristian Andersen, a virologist at California’s Scripps Research Institute, emailed Fauci in January 2020 about the possibility of the CCP (Chinese Communist Party) virus being engineered.

At the time talking about the possibility that the Wuhan coronavirus came from a lab-engineered concoction could get you banned from social media, Pope Fauci was circulating articles on “gain of function” research beginning February 1, 2020. One recipient would email back saying “the paper you sent me says the experiments were performed before the gain of function pause but have since been reviewed and approved by NIH,” adding another colleague “will try to determine if we have any distant ties to this work abroad.”

And so began a coordinated effort originating from a Feb. 1, 2020, teleconference organized by Dr. Anthony Fauci, director of the National Institute of Allergy and Infectious Diseases (NIAID), and Dr. Jeremy Farrar, director of the British Wellcome Trust to reshape the narrative. It took place after a group of health officials scrambled in late January 2020 to respond to public reporting of a potential connection between COVID-19 and the Wuhan Institute of Virology in China.

Following the officials’ conversations, public discussion of the source possibly being a lab leak was actively suppressed by social media platforms, health officials, and the World Health Organization (WHO). EcoHealth President Peter Daszak drafted the letter calling for “solidarity with all scientists and health professionals in China.”

On Feb. 3, 2020, there was a meeting (p. 116) organized by the National Academies of Sciences, Engineering, Medicine (NASEM), that reportedly included “officials from the FBI, the Office of the Director of National Intelligence, along with the NIH and the Department of Health and Human Services.” However, just days prior, immediately preceding the Feb. 1, 2020, Fauci–Farrar teleconference, Andersen had sent Fauci an email that noted that “one has to look really closely at all the sequences to see that some of the features (potentially) look engineered.”

Let’s say that the facts prove the virus was man-made. Would that have affected our response? I don’t know. But I do know the man in charge lied from the beginning. And that is sufficient reason to question everything he has said and done. Or it would have in a world that believed in science.

If that was not bad enough, Pope Fauci denied the efficacy of hydroxyl chloroquine- a cheap drug that has been used for decades by millions of people. There are many who disagree with him but were silenced. Specialist Dr. Stephen Smith, of the nonprofit Smith Center for Infectious Diseases and Urban Health, recently argued that perhaps 100,000 lives might have been saved had the medical guild not demonized the drug and utterly dismissed it

A  new study conducted at the Saint Barnabas Medical Center, New Jersey, found that when the dosages of hydroxychloroquine were calibrated and adjusted by patient weight, and fortified by the antibiotic azithromycin, there was a more than 100 percent increase in survival rates among COVID-19 patients—without any correlation to heart arrhythmias.

Trump gave the right to try for patients who were dying and were willing to try a drug not yet FDA approved, yet somehow hydroxychloroquine, a tried and true anti-inflammatory  was denied.

And then came vaccines. Everyone must have a vaccine. Ok, let’s say a vaccine is a good idea; like flu vaccines. Where’s the science that Covid will not disappear unless everyone gets a vaccine?. How did we get to a place that a vaccine was mandatory?  You won’t be allowed out and about without the vaccine because you will need a Vaccine Passport. What if you had Covid 19? Will you get the Vaccine Passport? Will you have to get a vaccine?

And heaven help you if you questioned vaccines. Twitter was there to protect the Pope.

Former Bill Clinton adviser and author Naomi Wolf, who has been critical of vaccine passports and media coverage of the COVID-19 pandemic, has been permanently suspended from Twitter. A spokesperson for Twitter told media outlets that Wolf was suspended because she shared misinformation about COVID-19 vaccines.

Dr. Scott Atlas, a senior fellow at Stanford’s Hoover Institution and the former chief of neuroradiology at Stanford University Medical Center, questioned Fauci’s mask mandates. Again, Twitter part of the College of Cardinals, deciding for us mere mortals what we can and cannot hear stepped in. That the person sharing the information is a respected doctor? Meh. “I don’t understand why the tweets were deleted,” Atlas said in an email, calling Twitter’s actions censorship. He said his tweet was intended to show that “general population masks and mask mandates do not work,” and he clarified that the correct policy is to use masks when one cannot socially distance. Atlas added that infections exploded even with mandates in Los Angeles County, Miami-Dade County, Hawaii, Alabama, the Philippines, Japan and other places.

Why would any scientist fear questions, especially regarding this Chinese virus, this pandemic? One would think that the more opinions shared the better. Well, one with a scientific, not political mind.

Anyone who claims “the science dictates” does not understand science and is not fit for office. Science is not an authority. It’s a guiding light. It demands to be questioned. It provides transparency. Knowledge is humanity’s greatest power against dark forces of tyranny and oppression.

Pope Fauci and his College of Cardinals, like all despots, fear questions. 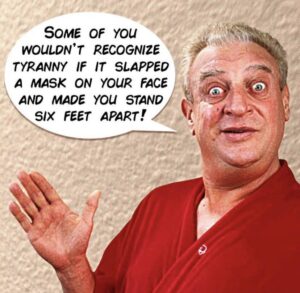